Ross McWilliam is a freelance speaker and author on mindsets.

He believes all young people need a platform of belief, specific skills and supported guidance upon which to build future achievements, be they academic or otherwise. This passion is borne out by his own physical and emotional health challenges.

He has over 30 years educational experience and has worked with over 1,000,000 children, young adults, and senior professionals.

Ross is a firm believer that everyone can reach their potential in life by finding their talents, something that the CUPPA journey brings to life. Since the death of his Father, and Danni, his young niece in 2012, Ross felt compelled to create a legacy to honour them. He did this by creating the CUPPA Book Series which helps young children develop a confident mindset. Following the loss of his Mother in 2017, Ross was determined to create another legacy, and this was to be Katy Cupsworth.
No matter what happens in life, Ross is a firm believer that every experience can ultimately help you grow and improve as a person, as long as you have belief. In Ross’s own words, “it’s not who gets there first that counts, just as long as you get there!” This echoes Ross’s struggles in life and his continual quest to improve himself and reach his full potential.
Ross has been involved in educating children, young adults and senior professionals for over 30 years, has visited over 1,000 schools, colleges and universities, and has probably changed the lives of one million people. In this time, Ross has developed not only his knowledge, but crucially, the way he tries to understand and engage with audiences.
Beyond this acquired professionalism, Ross has felt the real sadness of his own academic, health and life challenges. This has been borne out with him failing all his qualifications at school, going through acne face and body scarring, incurring disability and experiencing the devastating deaths of both his parents. It was a result of this devastation, of losing his ‘life mentors,’ that he decided to create a legacy to honour them both.
This started in 2017, when he released the CUPPA Book Series. This legacy of helping children reach their full potential in life, has been further bolstered now in 2019, with the release of Katy Cupsworth. Belief in oneself, and reaching for your potential in life is a precious gift that Ross’s parents gave to him, but which wasn’t fully appreciated by Ross until they had left him.

I was standing on the shoulders of giants, but never realised it. 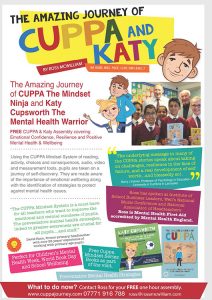 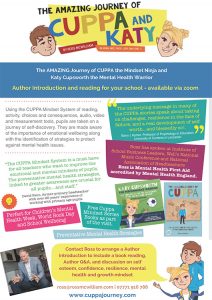 Join CUPPA and Katy on their journey in this collection of books, written to grow the mindsets of young children and promote positivity, self esteem, confidence, resilience and empathy.